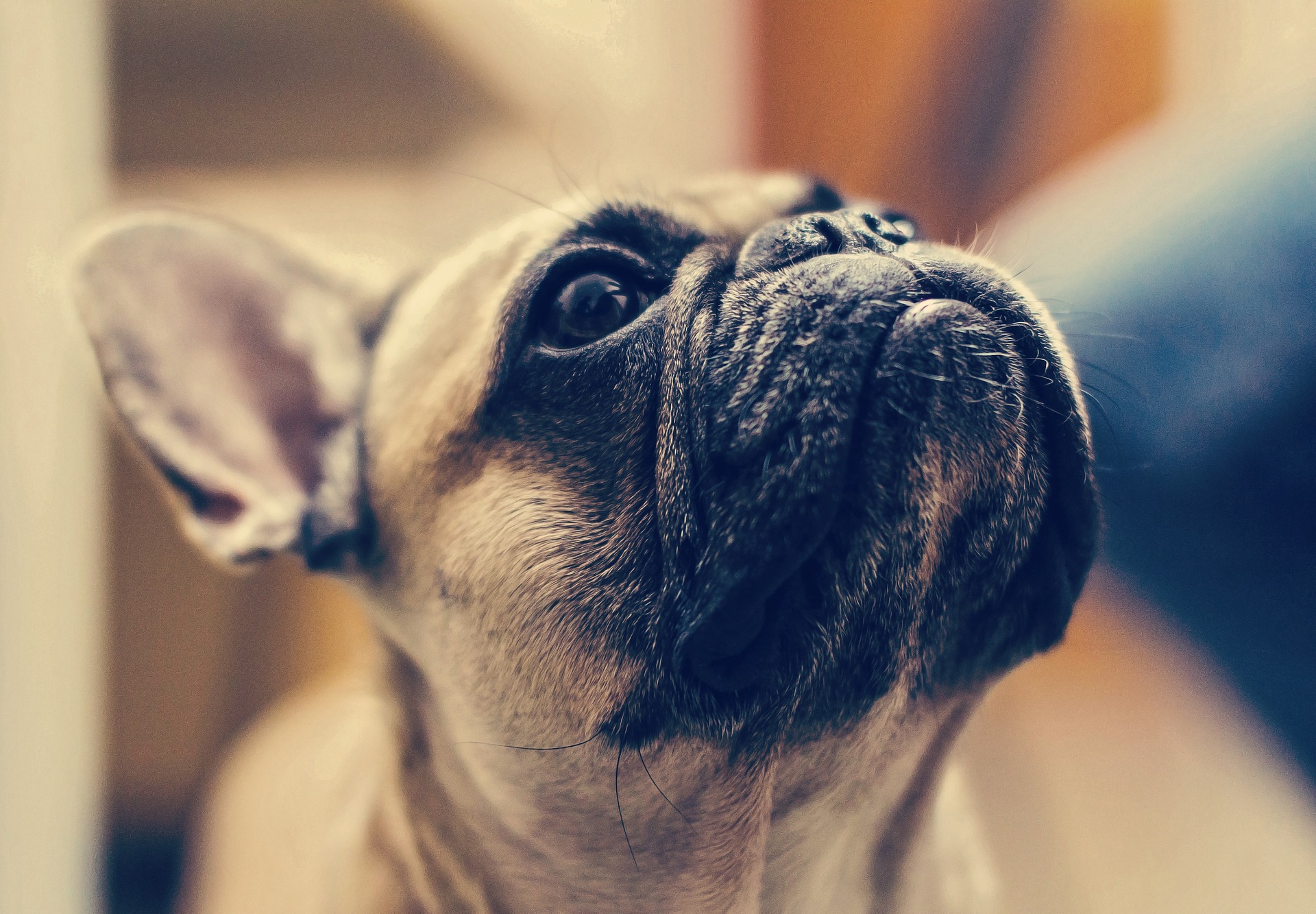 The French bulldog is a small, companion dog that is one of the most popular in the USA. They are not originally from France, as the name suggests, but from England. There, factory workers wanted some companionship while working and made selective breeding between English bulldog, Pug, and a Terrier to make this little cute breed. In this article, we will be looking at some of the pros and cons of owning a French Bulldog.

This adorable wrinkly face and bat-like ears were bred to be a lap dog, and that is what it is. It’s relaxed, lazy, and friendly. They don’t feel the need to please humans, as they see them as equal so training them can be a hustle. They do on the other hand enjoy and crave attention and company, so they will always be by your side.

Their unique body shape, with a big head and weaker hind legs brings these puppies adorable look but also many health issues. It’s important to remember that the French bulldog is one of the rare dog breeds that can’t swim. So leaving it unattended by the pool, lake, or even in a bathtub can be potentially deadly.

Pros of Owning a French bulldog

The French bulldog is one of the cutest dogs around, with a big and mushed head, bat ears, and bubbly personality. A pro of getting a French Bulldog is that they are cute and can be a joy to be around. They originally had lowered ears but bred to be upright and bat-like.

They also inherited wrinkly faces from their cousins, the English bulldog, and those cute wrinkles are there to allow blood to flow away from the eyes when the dog is injured in a fight.

2. They are easy to groom

Frenchie is a breeze to groom, because of its short coat and moderate shedding, an amazing pro of French Bulldogs. They only require occasional brushing and bath to be spotless. You can also trim their nails as needed. They love to be pampered and won’t put up a fight, especially if they are used to it from day one.

The wrinkly face also needs a bit of attention, because you want to make sure it’s dry and clean all the time. Using a wipe or a damp cloth will save you from odors and possible infections of the skin.

3. This breed is relaxed

This breed was made to enjoy life and stretch around while looking cute. They were bred to be companion dogs, and it’s where they shine. They don’t need too much exercise and one or two short walks will be more than enough.

They also prefer not to tire themselves up, because that flat-face and nose don’t let too much air in. They have difficult time breathing while resting, let along while running on a hot and humid day.

They are perfect for relaxed and easy-going families, with children and preferably with an AC unite.

This breed craves human attention and generally, they get along with almost everyone, an awesome advantage of French Bulldogs. They love well-behaved children and adore adults. They truly become a member of the family and love to spend time with the owners.

Frenchie is a great option for families, individuals, and even the elderly because they are low maintenance, usually quiet, and very happy to be by your side. They respect other animals and can be very playful if socialized early on.

Cons of Owning a French bulldog

1. They have a hard time reproducing

The French bulldog has a large head and pretty week rear end, which means they are unable to naturally reproduce. Because their head is so big and heavy, and legs too small to carry it up, a male bulldog is not able to mount the female to reproduce. So humans have to be involved and impregnating the female dog is done by artificial insemination.

That is not the end of reproducing problems for this breed, because giving birth to these big-headed puppies is impossible, so they are almost always born via C-section. These reproducing flaws is one of the worse cons of French Bulldogs. To make things worse, these surgeries need anesthesia, and dogs with short snouts are particularly sensitive to anesthesia.

All the reproducing challenges mentioned above mean that this little puppy will come with a big price tag. Their struggle to conceive and safely birth puppies often means big expenses for the breeder.

The entire process of reproducing and delivering puppies has to be under an experienced eye of a vet. To get more puppies, the breeder must risk the life of the mother dog, and that will add to the price of the litter.

This is why French bulldogs are not suited for every budget and one of the reasons why they are so hard to adopt. If a French bulldog does appear in some shelters, they are usually first to find a home.

3. They have some health problems

Unfortunately, this breed has the reputation of one of the most demanding dogs, healthwise. The list of potential problems they can have looks endless, but let’s mention a few:

A huge con of French Bulldog is that they are prone to many health problems, and this big list for such a small dog will be approximately as long as vet bills.

4. They snort all the time

This flat-face dog or brachycephalic dog feature they have is the main obstacle for breathing. This also means that air makes sound with every breath, and they always snort. This can be adorable to hear for a short time, but before you go out and get one for yourself think carefully.

They snort all the time, and while we agree it can be seen as an adorable feature that often makes you laugh, it can get a bit tiresome. The main point here is “all the time” because they can’t help it and will produce some sound even in perfect conditions.

They are especially loud when they are running or getting tired, or when the temperatures are high. There is a selective surgery available to help them with this problem, by opening up the airways a bit. But like any surgery, it is risky and expensive.

5. This breed tends to be stubborn

Even though the French bulldog is considered a moderately intelligent dog, it can be a hand full to train. This is because they can be incredibly stubborn and simply don’t feel the need to obey commands.

They were made to be companions and lapdogs, not to be trained to do tricks and hunt. This characteristic is still present today, and some of them are downright mischievous. They can be trained, but with great effort and over a long time. This is why it’s advised to start early and keep up.

French bulldogs not only love human attention and presence, but they can’t be alone. A con of owning French Bulldogs is that they are prone to developing separation anxiety issues and all though they are not a barking dog, they will cause a disturbance if left alone.

This can be a big disadvantage for French Bulldog owners who have to leave pets alone at home, from time to time. So, it is a big commitment to get this possessive puppy.

To recap, French bulldogs are friendly, cuddly, and cute companion dogs. They can adapt to all family members and almost any living situation. They are fun, adorable, and very attached to the owner.

On the other hand, they are prone to many diseases, reproductively challenged, expensive, and somewhat hard to train. But for the right family, that has the budget, patience, and strong will, this dog can become a family member in no time.

I hope that this article on pros and cons of owning a French Bulldog was helpful. If you are interested, visit the Dog Category!